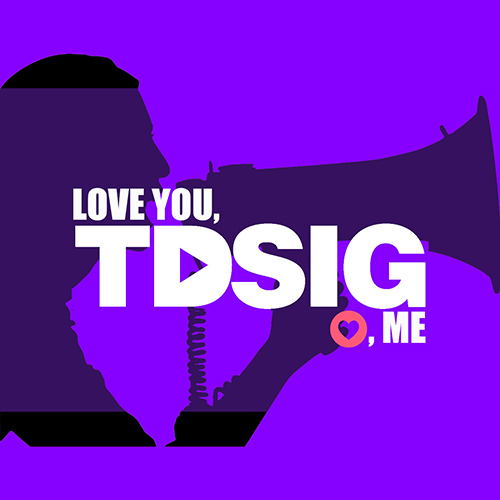 Six years ago, I wrote a love letter to teaching associations as my time on our local TESL Toronto Committee was coming to an end. Much of my perspective on the benefits of or learnings from volunteering to run a Committee that facilitates teacher development at different levels was said in that post, so I won’t repeat myself there. It’s good stuff. If you haven’t volunteered before, take a look.

At the time, I was relatively new on the IATEFL Teacher Development Special Interest Group (TDSIG) Committee and still questioning the direction I wanted to take my professional life next. Now I can look back at a dozen consecutive years of volunteering on these committees, with the last five leading as Coordinator, but on a far more global scale and reach. But I’m also done. I don’t have a new committee already lined up and for the first time in those dozen years, I’m going to be watching from the sidelines. This comes with mixture of relief and uncertainty. I’ll get to those shortly. First though, I want to reflect on this TDSIG path that’s been an immense chunk of my life for so long now.

Long before I actually went to an IATEFL Conference, I was pretty well connected to what we’d call a PLN at the time: a group of teachers who had blogs and Twitter accounts and actively shared our thoughts and resources on ELT. This really helped me feel like I had a built-in group of friends and colleagues for when I did go abroad for the first time. After a few years, I formally joined IATEFL in 2012. In doing so, everyone chooses a Special Interest Group as their primary and included in the fees. I think I chose TDSIG partly because it was general enough that I thought I wouldn’t be committing myself to anything too specific.

I participated in IATEFL conferences online as much as I could in the next few years, but it wasn’t until Manchester 2015 that I attended my first IATEFL Conference in person. It’s there that I really understood what it meant to be part of a SIG, as I attended my first Pre-Conference Event with a small group of others who relished teacher development as much as I did. These SIG-organised and hosted events bring together members and non-members most interested in the topic or the SIG more generally. At this one, the TDSIG Committee only consisted of Sinéad Laffan, Willy Cardoso, and Divya Madhavan: a pretty cozy group who’d made up that entirety of the committee that year, though I didn’t know that until later. Divya was a good friend (still is!) and encouraged me to apply to join this tiny Committee so going into the PCE, she suggested I work with her on live-blogging the event and arranging an interview with Adrian Underhill later in the day, one of the founders of the SIG in 1986. No pressure on someone completely new to this IATEFL in-person environment… I did the live blogging; I did the interview; and I met Sinéad to make an impression.

Next up: Divya asked me to edit a small sample newsletter submission and write up a statement of purpose for why I wanted to join the TDSIG committee. I did so and by June that year, I was welcomed onto the Committee, which had now doubled in size, with Michael Harrison and Adam Simpson also joining, to my complete surprise. Suddenly Mike and I were charged with TDSIG’s online presence (blog, website, socials) and Adam onto the paper (!) newsletter with Willy. Sure, I think we contributed to the way TDSIG was branded online–we did redo the colour palette for the logo to that glowing indigo colour–but it wasn’t until 2017 when Sinéad and the rest of the group kindly ‘voted’ me into the Coordinator role (at first jointly) that I really felt I had an impact. So I want to look at a few things I feel I had a strong hand in now because proud. Please indulge me or skip the whole next block.😇

Organisation: I like consistency and access, so I started writing everything down where everyone on the Committee could access, including agenda and meeting notes on a living Gdoc and folders for all our projects on Gdrive that matched channel names on our Slack group. That seemed nicely consistent. Our former roles also didn’t quite seem ever fully work out, so we tried reorganising them from traditional roles (Treasurer, Secretary, Events, etc.) to project-based (i.e. Developod, Publications, Social Media, etc) and left events open as a rotating chair depending on where the event would be located.

TDAJ: One criticism that was loud in my ear at the beginning was that to some, our perceived approach to information was more popular than substance. I think the substance was there always in ebbs and flows, but I heard the perception nonetheless. This led to the TDAJ (Teacher Development Academic Journal) project. We tried a first volume on a variety of subtopics, then the second on focused theme, and now the third coming shortly on a commissioned issue. These were hard work but well worth the endeavour. I did the design and websites myself.

Web Carnival: I have to admit that I’m probably most proud of this project. It started as we were first thinking through whether we wanted to join the regular webinar game that lots of other SIGs and associations had done. Nahhh, it just felt that we’d get lost in the multitude of online voices out there doing the same, so I came up with the idea of a carnival, where we’d host a month-long community-driven dialogue about a particular theme, which could consist of tweets, video samples from teachers, short blog posts, submitted articles, or literally anything else people wanted to share on the topic. Then over a weekend at the end of the month, we’d host a collection of talks by teachers on the topic as a live online conference.

Eventually the pandemic started and the anti-Black racism that persists in all sorts of place came to the forefront of news and my work on Queer inclusion in materials was happening and it all just seemed like TDSIG could use its platform to showcase these issues in ELT on a scale that normally we hadn’t seen in events, so I chose to repurpose Web Carnival to focus specifically on Race & Queerness in ELT and follow it up with episodes on our podcast, Developod, and a dedicated issue of the TDAJ from its speakers. It seemed a natural fit to partner with Global Issues SIG and I got to work with the equally passionate Coordinator, Rose Aylett on making this event as meaning and cool as possible. We made the event donation-based for the first time ever, with those funds being split between a crowd-sourced relevant charity (Casa Um in Sao Paolo, which has housed around 380 LGBT+ young people expelled from home by their families because of their sexual orientations and gender identity) and IATEFL, which itself is a charity. Representation was solid at the event and even through the program design itself, I aimed to imbue the principles of decentring white, straight, English-based perspectives. Anyways, it all took a lot of thought and consideration, much of which is probably unnoticed, but I know. A year later, we reconvened to bring Web Carnival into Paulo Freire’s influence regarding critical pedagogy in ELT. Again, very proud of this one and fulfilled a goal of working together with BRAZ-TESOL (Brasilia) in its organisation.

Pre-conference Events (PCE): In all fairness, the pandemic generally messed up all the regular opportunities of having in-person PCEs normally held at the IATEFL Conference in the UK. The one I did get to take full responsibility for was with Global Issues SIG on ‘Are you a social justice warrior?’ in Liverpool, which has probably the best attendance of a PCE at the time. A) It was so fulfilling to partner up with a SIG I probably would be a part of I’d made a different choice at the beginning; B) the talks, the conversations about them, and yes, the graphic design I got to do, filled my heart with inspiration. This year, we planned one on Social Emotional Learning for Belfast (which would have happened yesterday as a matter of fact) but registration was too low to proceed: a bummer way to end for sure…

Leading: In most spaces professionally, I end up in a leadership role. I guess I naturally gravitate to these opportunities because I like guiding and supporting teachers in meaningful projects, and organising the way things can be done well. When I was in the private sector, I became a DOS. At the university, a director of my EAP program and summer ELT program. At TESL Toronto, I spent 3 years as its President, and now with TDSIG, 5 years in the Coordinator role. I guess I’m either good at it or ruthless for power; let’s hope it’s the former. I do try really hard to consider how to communicate what I want and what needs to happen and what everyone has power themselves to effect change. It seems kind of awkward to brag about this, for sure. I guess I’ll just summarise that these 5 years have been a huge blessing for me as well.

So now it’s time for that all to end for now. I think it’s easy to see how I’ve left my mark, both in initiatives but also topics. I’m so very proud of everything we’ve done in TDSIG. It’s part of me. The folx I’ve worked with on the committee have all played a role in its evolution. And it’s time now for that to change to something else. It tugs at my heartstrings, but it’s also an incredible responsibility lifted from me. For the first time in 12 years, volunteering for teaching associations and I will be on a break. Maybe we both need it for a while. 💖

You did a lot and had a very big impact through the SIG’s work. Congratulations and look forward to more. But enjoy a break!

TDSIG will miss you Tyson, but it’s good to have a break too! Fascinating to read all of the things you did during your time as coordinator – thanks for sharing 🙂
Sandy

Obviously, all the work you’ve done has been super-important, but as a non-TDSIG member, but regular popper-in, I do especially love the design vibe you’ve created

This website uses cookies to improve your experience while you navigate through the website. Out of these, the cookies that are categorized as necessary are stored on your browser as they are essential for the working of basic functionalities of the website. We also use third-party cookies that help us analyze and understand how you use this website. These cookies will be stored in your browser only with your consent. You also have the option to opt-out of these cookies. But opting out of some of these cookies may affect your browsing experience.
Necessary Always Enabled
Necessary cookies are absolutely essential for the website to function properly. This category only includes cookies that ensures basic functionalities and security features of the website. These cookies do not store any personal information.
Non-necessary
Any cookies that may not be particularly necessary for the website to function and is used specifically to collect user personal data via analytics, ads, other embedded contents are termed as non-necessary cookies. It is mandatory to procure user consent prior to running these cookies on your website.
SAVE & ACCEPT
wpDiscuz
3
0
Would love your thoughts, please comment.x
()
x
| Reply
Loading Comments...
%d bloggers like this: