I’ve rewritten a love letter of sorts to TESL Toronto (a teacher association committee I’m leaving after 6 years) three times from three different angles and voices. There’s much I want to say to different groups involved, but no one focus conveys my intentions vividly enough. I think it’s because no matter what words I use or perspective I take, it doesn’t capture that magnitude of its impact. It’s been a love/hate relationship with the stakeholders of TESL Toronto, mostly love for my colleagues, the membership itself, and the work I’ve been involved in. The effect of being its president and chairing TOSCON for 3 years that it has had cannot be understated–roles, or the likes of which, I’d highly recommend any teacher eventually seek in some capacity during their careers.

Involvement behind the scenes of a teacher association committee broadens one’s perspective on everything: the organisation of events, the differences in values between teaching contexts, the communication (effective and not) between stakeholders. From participating attitudes and opinions throughout these six years, I’d venture to say that the last of these isn’t always clear, transparent, or understood. I’d like to think that the volunteer efforts of individuals on committees don’t go unnoticed, but this is only the case when the rationale for products of these efforts is communicated well to the members and that they are willing to hear. It takes concerted effort on both committees and membership to learn how the other feels and not be caught up in a shroud of secrecy (intentional or not), ego (intentional or not), or preconceptions (intentional or not).

Case in point: a committee has a mandate and limitations on their freedom with that mandate (stakeholder policy, time/financial constraints, etc.). Members could benefit from taking the time to understand these two things by asking through appropriate channels. Committees could openly communicate why that limitation is there and who the responsible people are to go to with their concerns. This plays out in terms of expectations of the committee, the membership dues, and the events and projects undertaken. Maybe limitations can change; maybe they can’t. Knowing if and why can make a huge difference to all parties’ perspective. Being appropriately active builds connections, not walls.

Expectation and skill building is vital to communicate within a committee also. Especially when people come and go and experience with documentation varies, oral history can be the default way to pass down information, but this doesn’t work when knowledge disappears with its creators. Valuable work can fall by the wayside without established modes of transfering this to the next group to learn then improve. Documentation of process and responsibilities trumps oral tradition. Since committee positions are rarely paid and we all have other work to divide our time between, it can be challenging to become experts in committee procedure when skills are not built or encouraged, but merely expected. I like to think that in TESL Toronto’s case, we have a functioning system that can be easily maintained. It’s up to the individuals to use it, but also be open to improvements and change. I hope that every teacher association committee considers who comes after them. It makes the learning curve less steep (and awkward) than starting from carte blanche. Leaders openly create space for the next leaders.

No matter what state, a well-oiled machine or near disarray, I’ve been lucky to be part of committee teams like TESL Toronto, with its diverse personalities, diverse areas of expertise, and diverse skill sets. It’s how the group individually contributes to the whole that inspires the best work. I think I’m most proud of what TOSCON has evolved into during my time, but I’ll also be thrilled to see how it changes in the coming years. I’m grateful to have met so many people, worked together with them in various combinations on projects and events, and learned more than I could have on my own. Community fosters engaging work more than isolation.

Thank you for the last six years, my TESL Toronto stakeholders. You’ve taught me a lot I didn’t know that I didn’t know. These experiences shall follow me to TESL Canada Research and Outreach Committee (two years down, up for at least another year) and IATEFL Teacher Development SIG Committee (one year down, up for several more). 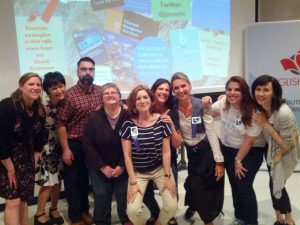 This is completely true of management too:
“Expectation and skill building is vital to communicate within a committee also. Especially when people come and go and experience with documentation varies, oral history can be the default way to pass down information, but this doesn’t work when knowledge disappears with its creators. Valuable work can fall by the wayside without established modes of transfering this to the next group to learn then improve. Documentation of process and responsibilities trumps oral tradition.”
I’ve heard of so many instances where hard work has disappeared and people have to start from scratch because of the reliance on oral tradition. Write it down, people, write it down! 🙂
Thanks for writing this Tyson. I’m hoping to get some kind of association started in the local area over the next couple of years, as (as far as I know) there’s nothing here yet, so I’ll definitely look back on this post for tips.
Sandy

Thanks for the (rare) comment, Sandy (I mean in general, not by you). 🙂 You pick out a very key point I’ve experienced first hand. I really hope that everything we documented in TESL Toronto continues to those that follow. What I always try to consider when doing any role (teacher, manager, board chair, etc.) is if I left, would what I’ve been doing be easily followed by the next person? Good luck on building a new association. Hey – Belta did it recently!

Sorry to jump in on a thread, but how comes there’s not much going on in Poland where you are, Sandy? The next IATEFL Poland is in Szczecin, which is relatively near to Bydgoszcz. Surely you don’t need to start something completely brand new but could set up a branch of IATEFL Poland?

No idea why there’s not much going on here – think it’s just that nobody has pushed things before.
Szczeczin is relatively close, but still too far away to make it that easy to get to, though I do know some people from Bydgoszcz who are going (unfortunately not including me). A branch of IATEFL Poland could be a good idea if I can get people interested. Thanks for the suggestion!

[…] years ago, I wrote a love letter to teaching associations as my time on our local TESL Toronto Committee was coming to an end. Much of my perspective on the […]