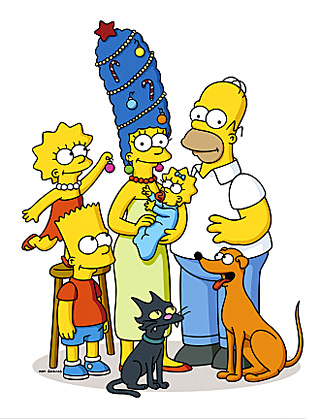 The fourth and final tangent we’re going to show you with this very short Simpsons clip is to practice interjections and interjecting sounds.  What you’ll need is this handout.

You’ve introduced the video and context however you find most interesting for you students.  At this point, here are our suggestions:

Write the word “yes” on the board.  Elicit from Ss ways that they can convey this meaning without saying “yes”.  For example, “yep”, “ya”, “uh huh”, nodding up and down, “mm-hmm” and there may be some other backchannel expressions or gestures used by various cultures. Introduce that some of these little words or sounds are also used a lot in conversation to convey meaning, along with body language and the words themselves.

Elicit from Ss other interjections they use in their language.  If lost for suggestions, prompt Ss with words like “no”, “confused”, “nervous”, “thinking”, “shocked”, etc.  If duplicated in English, add them to the board.   As Ss volunteer information, try to note to them that for ones that we don’t use in English, it can be misunderstood by native speakers if they use their own in conversation.  Give an example if you have any experience.  For example, from Korea, they use the first half of “uh huh” as a backchannel to demonstrate they are listening or agreeing in conversation.  To English native speakers, it comes across as just a meaningless sound.

Watch the video. Ask Ss to identify how many interjections are used by the Simpsons in the segment.  Answer:  9, with “See?” being arguable since it’s a short form for “Do you see?”.  Give Ss the handout, watch again and have Ss highlight each interjection or interjecting sound on their handout.  Take this up as a class.

Finally, watch the video a third time.  Assign Ss one of the characters (Homer or Frank) to pay attention to the attitude of the character from whom the interjection comes.  Are they happy?  Sad?  Annoyed?  Angry?  When finished, have Ss roleplay the dialogue in small groups together.  Watch Ss and try to pick Ss who act most exactly.  Have them perform the dialogue for the class.  While they do so, stop at each interjection and facilitate Ss’ understanding of meaning and usage:

As an interesting aside, you could also mention the two Simpsons-created interjections (“d’oh” and “meh“) that have officially be added to the dictionary.

Summary
Although none of the posts in this series attempts to be a full lesson, the point that we are trying to make is that instead of spending hours making more and more materials or killing class time watching an entire movie or television episode, why not see how you can reuse video clips you’ve already chosen?  There is an enormous amount of language that can be taken from so many short scenes.

Thanks for these lesson ideas! I really like the angles you’ve taken with the video.

Glad you like them. There are so many things you can extrapolate from short video clips. Too many times I’ve observed teachers using video for very litttle beyond general comprehension (and more likely entertainment). It’s really unnecessary–and from a language point-of-view, wasteful–to watch an entire episode in one sitting.

Hello Boram! Thanks for stopping by.

This website uses cookies to improve your experience while you navigate through the website. Out of these, the cookies that are categorized as necessary are stored on your browser as they are essential for the working of basic functionalities of the website. We also use third-party cookies that help us analyze and understand how you use this website. These cookies will be stored in your browser only with your consent. You also have the option to opt-out of these cookies. But opting out of some of these cookies may affect your browsing experience.
Necessary Always Enabled
Necessary cookies are absolutely essential for the website to function properly. This category only includes cookies that ensures basic functionalities and security features of the website. These cookies do not store any personal information.
Non-necessary
Any cookies that may not be particularly necessary for the website to function and is used specifically to collect user personal data via analytics, ads, other embedded contents are termed as non-necessary cookies. It is mandatory to procure user consent prior to running these cookies on your website.
SAVE & ACCEPT
wpDiscuz
4
0
Would love your thoughts, please comment.x
()
x
| Reply
%d bloggers like this: