a Google Translate experiment with language 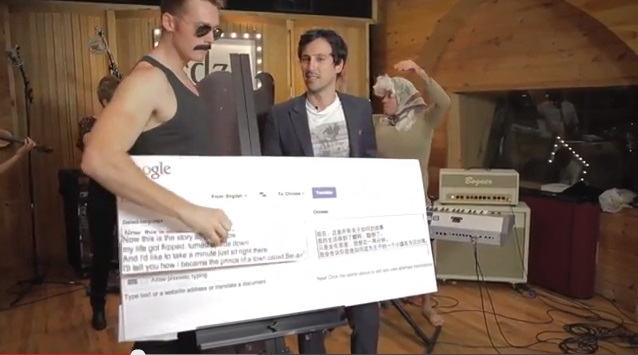 <cue 90s beat>
Now this is a story all about how
We can use TV theme songs to bring students ’round
To seeing Google Translate for how it really makes
Their writing and their reading, quite substantially fake

<Tip beat 90s>
Well, this is a story about how all
We will be able to use the theme song from the TV tower student
To see how the Google translation is actually
To read and write their false much more

You might notice that these “rap” lyrics (at least the first ones written by me for this post) sound familiar if in fact you rapped them as you read. Back in the day, The Fresh Prince of Bel-Air (1990-96) was the next-generation Cosby Show, but it was cooler than that. It had the family values, but also the rags to riches main character that so commonly causes both conflict and comedy. Add to that Will Smith (at the time part of DJ Jazzy Jeff & the Fresh Prince)’s narrative, comedic rap style, the Fresh Prince of Bel-Air hooked viewers of all backgrounds and ages. Though using excerpts from sitcoms is not foreign in language teaching situations, focusing on the theme songs and in this case, their theme song as thrown through Google Translate, is an overlooked treasure trove. For anyone unfamiliar with the original, just sit right back and he’ll tell you how he became the prince of a town called Bel-Air:

As you probably have noted to yourself already, there are various lessons that can spawn from this: characteristics of genre-specific writing, sentences structure, story-telling, etc. I’ve included a full lesson plan with handouts for teacher and student, should you want to explore these ideas further.

Where I’ll focus specifically for this post is how one group experimented with this theme song by putting the lyrics through Google Translate. They initially take the lyrics, submit them through Mandarin Chinese, and then back to English. Immediately there are noticeable differences in the language presented, which they deliver through a performance of the theme song again. What initially occurs is two-fold:

For example, the lyrics “Chillin out, maxin, relaxin all cool” becomes “Cold, apricot, relaxing all cool”. It begs the question of meaning-loss in both regards. Imagine students taking sentences they don’t understand from a text, popping them into Google Translate to their language, and resulting in a twisted interpretation.

I particularly like how the lyric “We pulled up to the house about 7 or 8” turns into “fire in the house for 7, 8 years“. Confusion, students?

How can this be used with students? Several of my students very obviously use Google Translate either to translate our texts into their language or translate their writing into English, yet they often fail to see how meaning loss and completely mistranslated sentences occur (or how I could possibly know that they’ve used Google Translate). Where doing so from English to L1 may help with gist, this video experiment concretely demonstrates how even that can be misleading.

Using the video with students

I suggest taking the original lyrics, use guiding questions to gauge clear understanding of meaning and then having students paraphrase into their own words first. Then give individual lyrics from the translated version to pairs, who need to identify the new meaning, which original lyrics it may be translated from and finally how meaning differentiates between the original. This can put a stamp to students on these two pitfalls of using Google Translate.

A full lesson plan is here:

It includes procedure and materials for:

So, we’ve pulled up to the end, hopin it’s not too late
And I yell to you teachers, ‘yo Teach, contemplate’
I scoff at Google Translate, we are finally there
To show our students next time, use your own words if you dare

Nathan Hall (see comment below) took the first paragraph of this post and ran it through the translator. Brilliant idea! I decided to do so with a comment I left on Teaching English’s FB page, which talks about my students I took it from English to Japanese and then back to English. See if you can understand it:

“Because it feels like than they can do, if they do a good job of complex lighting, some of my students, tend to rely on such as translation of Google. Look at the English vocabulary strung together in a seemingly complex pattern, teacher or care about this jibberish, as it is necessary to determine strongly recommend the former, and whether or not to return it is not marked I am they , and you would have to comprehensible.Then us it. In this lesson a great Fresh Prince of Bel-Air video, will help you to get, and to kick this habit of while away from home.”

seriously, love you forever for this – so very much fun, and totally on my list when my students start asking about Google Translate. and yes, I do love Wil Smith at this stage in his career! (reminds me I need to start my 10 and 12 year old sons on some episodes).

And in my class, when we finish our “les contraires” raps with MC Madame (that would be me), we do the symbol for “mot” (word), which is like the sign language letter “m”, but we add a couple chest thumps first.

I took the first paragraph of your blog post and ran it through a translation versions myself and it ended up as this:

Back in the day, The Prince of Bel-Air (1990-1996) was a new generation of Cosby Show, but it was better than that. He had a family, but also poverty rektor Character Wealth in Conflict often useful in place and Comedy. Add og Will Smith (at that time part of DJ Jazzy Jeff & The Fresh Prince) narration ‘s, komisk style rap, Prince of Bel-Air hearings curves Origin and All Ages. Although the use of fragments of comedy is not a Teaching foreign language situations focusing on the theme of the song and in this case, the song is like a launch Google translate is a treasure of Oblivion. For those familiar with the original menu, just sit back and rørende as it became a town called Bel-Air Prince:

I particularly like the phrase “a treasure of Oblivion”. That should be Google Translate’s new catch phrase. 🙂

That is so awesome, Nathan. Why didn’t I think of this? 🙂

You can add a reckless today that I am so happy. 😉

You are so eloquent.

You will note that ordinary words translate not too badly. But idioms, slang, and rhyming verse, do not do well at all. Google translate is wonderful. But a real human who knew both languages well would do a better job. How could you expect else? Language is a living thing. Although this same experiment was once done with “translation books”, in, I think, the late 1950’s. (They used, i think biblical verses – I do not recall the particulars.) The results were not much better. The experiment could also be done, in say, Japanese (almost as alien as Mandarin), Icelandic, Latin, Swedish, French, Russian. Thus Google’s accuracy for translation in various tongues could be judged. It might make an interesting project for not just computer science, or language/translation students, but for a stats class… There are many possibilities. Indeed, perhaps Google should be contacted, the experiment might be of interest to them….

I don’t expect a computerised program to translate more accurately than a human who knows two languages proficiently. Unfortunately, language learning students sometimes think they do because words come out in English in a way that though they can’t assess as being good or poor, appear better than what they could write themselves (at least to them). The point here is to help students like mine recognise that Google Translate isn’t the solution to their problems, in a fun way.

You should read Nathan’s comment above where he used the first paragraph of this blog post through Google Translate and then back to English. It’s not like that paragraph is simply a string of idioms, but it still comes out quite incomprehensible. Idiomatic expressions and rhyme aside, language isn’t a series of ordinary words, as you know.

Thanks so much for a wonderful lesson. It is going to be so helpful with my students. Quite what I need to reflect with them about using google translation. Thanks a million!

So glad it’ll be useful for you, Rose. Thanks for reading.

Hi, I would like to remark some aspects about Google Translation and that differentiates it from other translation tools. It is not a translator but a database algorithm used to search in a database sorted by pairs EN > rest of langs, rest of langs > EN. Based on this, Google chooses the best match for each translation unit, in the translator world they are called segments. Also, when there is no match, the translation remains partially in English, hence, EN > ZH > EN still preserved some idioms. I would encourage the people here to take a paragraph of their iPhone or any major brand similar smartphone and try to translate, sometimes the translation for that part has already been aligned and the result is pretty good.
Anyway, even if they align all the texts in the world, they will not be able to translate more than a user´s manual, as language reflects the reality of the speaker which is not understandable by a machine.

Good points. Thanks for the insight.

[…] from these tools is great fodder for this discussion and provides a real life example and practice. Here’s a great lesson plan that uses Google translate in a similar […]

This is awesome! I’m going to start my school year of teaching Spanish with this lesson. Translators are valuable, but they do not replace the human mind!

Awesome. 🙂 Let me know how it goes or how you use it.

[…] It’s written by AI bots after analysing hours and hours of footage. It’s reminiscent of an old Google Translate experiment I used to do before it got better at translating. So, here’s a quick activity suggestion for […]

This website uses cookies to improve your experience while you navigate through the website. Out of these, the cookies that are categorized as necessary are stored on your browser as they are essential for the working of basic functionalities of the website. We also use third-party cookies that help us analyze and understand how you use this website. These cookies will be stored in your browser only with your consent. You also have the option to opt-out of these cookies. But opting out of some of these cookies may affect your browsing experience.
Necessary Always Enabled
Necessary cookies are absolutely essential for the website to function properly. This category only includes cookies that ensures basic functionalities and security features of the website. These cookies do not store any personal information.
Non-necessary
Any cookies that may not be particularly necessary for the website to function and is used specifically to collect user personal data via analytics, ads, other embedded contents are termed as non-necessary cookies. It is mandatory to procure user consent prior to running these cookies on your website.
SAVE & ACCEPT
wpDiscuz
18
0
Would love your thoughts, please comment.x
()
x
| Reply
Loading Comments...
%d bloggers like this: