Critical readers in the (mis)information age 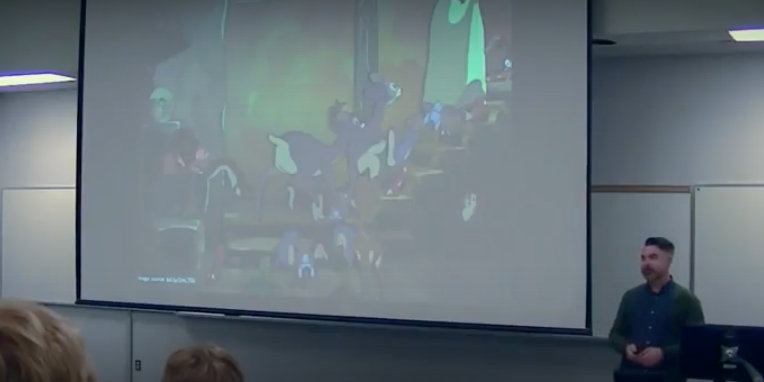 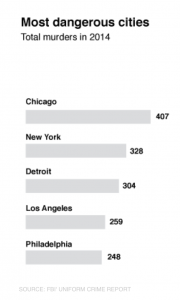 Did you know that Chicago was the most dangerous city in the US in 2014? I didn’t. I would have thought it was some bigger city, but according to this set of FBI statistics of total murders, I was wrong. But actually, was I? It’s very easy to look at this graph at face value without digging much further into the narrative it presents. As readers, we absorb this information, particularly when it comes from a perceived authority, but do we question it appropriately? I hope so, but I’m not sure that’s always the case, especially when it comes to our learners who are being inundated with new information in a new environment in a language other than their L1. If you and they are critical readers, however, you may have questioned the population of these cities and therefore the related ratio, which would provide a more contextualised definition of ‘most dangerous’.

Let’s take a closer look at the same information presented in this chart, but with more context. 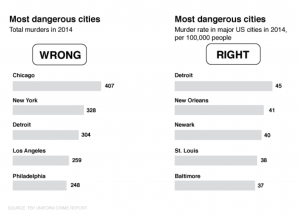 On the right (and “right”) are similar murder stats but put into the context of population. A different picture then emerges: Detroit, based on the ratio of murders to population, comes out as the most dangerous city. One would argue this is more true, though no more accurate in terms of numbers than the “wrong” chart.

This example of critical reading is fairly benign. Yes, you might change your travel plans or second-guess long-term life plans if moving to Detroit or New Orleans was a thing for you, but really, for most of us, it’s more or less an interesting exercise and we’ll move on quickly to something else. Imagine, however, that what I presented to you was something a bit more sinister to our learners: news that demonizes them or their cultures with manipulated narratives or completely unfounded ‘facts’ on the left. Would they know better than to take it at face value? I hope so, but as someone new to a country or interacting with everyone in L2 or L3 or L4 for the first authentic time, learners may not do so immediately (I mean, does the rest of our society even?).

Last weekend, I had the pleasure to be invited to Guelph as the plenary speaker for TESL Waterloo-Wellington Conference, a local ELT event at a college about an hour outside Toronto.  For close to an hour, I talked about this need for critical reading skills practice, situating it mainly in the recent flurry of fake news and alternative facts in this post-truth era. I had four critical questions to address:

I’d like to share this talk in its entirety with our community, but first let’s try a couple more little exercises. 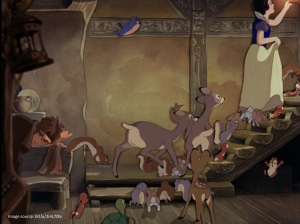 Look at this image from Snow White. Look familiar?

OK, now really look at it. Did you notice anything about it that seems off in some way?

Part of me just wants to leave you hanging. But as an educator, I feel compelled to guide you… Who’s that guy? I don’t remember a fully grown man sleeping in the dwarves’ house. Do you?

At first glance, because of what Shermer (2002, 2017) refers to as ‘cognitive simplicity’, we often overlook small inaccuracies or not even notice them because it’s easiest to believe the information we are presented with. More specifically, when untruth appears to be plausible, even in the face of what we know, our brains often disregard it as it’s not threatening. Because this guy doesn’t really look out of place, it’s easy for us not to care that he’s there. One place this pops up in texts quite commonly: Facebook memes. Take a look at Russ Mayne’s post here about lightning rods, edumemes, deepities, etc. Down to even a micro language level, one could argue the same phenomenon occurs when our learners write grammatically incorrect or lexically mismatch phrases despite knowing their wrong: it’s just too unimportant to care. But is it? Does inaccurate info never lead to negative impact? PS – did you overlook any error within this paragraph because it’s not that important? 😉

While photoshopped imagery seems pretty innocuous, hardcore beliefs about cultures, education, or even language learning itself, can be wrong. Yet despite sometimes overwhelming evidence to the contrary, some individuals in our society refuse to budge. Have you ever wondered how they can continue to maintain a belief even when almost everyone seems to believe the opposite? Check out any grammatical syllabus, or consider any ELT job ads with the words ‘native English teachers’ included sometime, as examples. There’s a certain threat perceived here and the response, one where people push back illogically, is what Nyhan & Reifler (2010) call the ‘backfire effect’. The Onion does a great job of illustrating this.

Let’s try one more little exercise. Who knows what Dihydrogen Monoxide (DHMO) is? I hadn’t, but I do now. Let’s do a little learning. This information comes from DHMO.org: 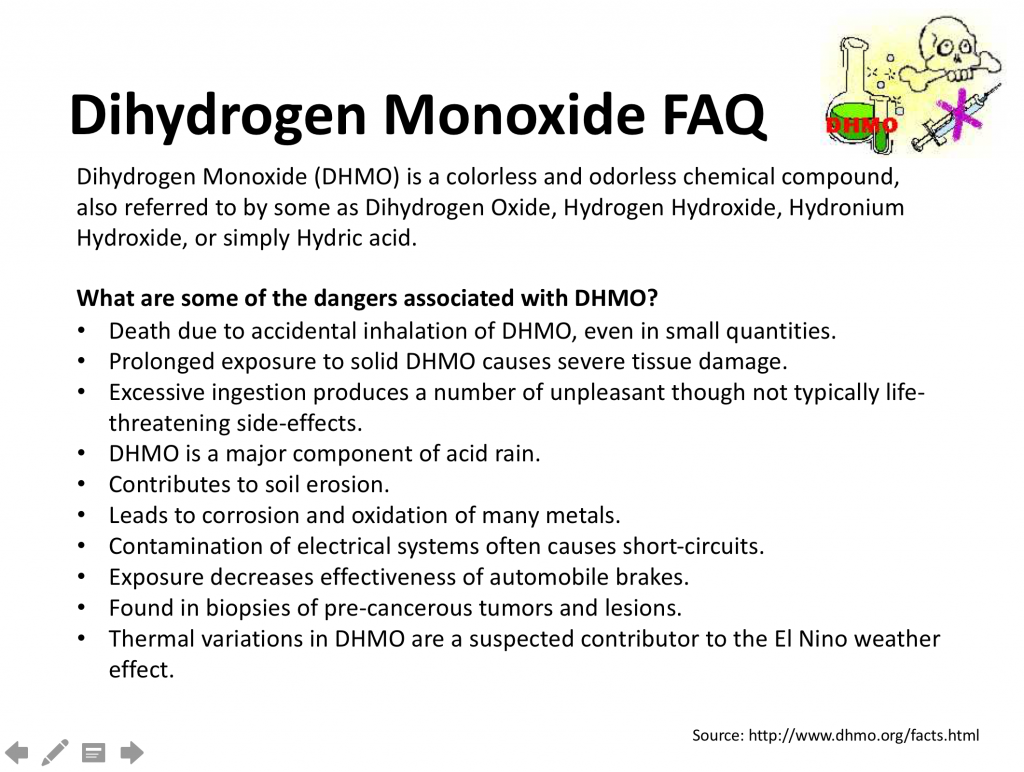 Sounds like a chemical you don’t want to come into contact with, right? Well…consider all of the bullet points. What do each have in common? What element that you know of may be in each?

Water. Now test that theory on each bullet point. This is just a quick example of how text, when presented by what appears to be an authority, can shape a narrative that leads an uncritical reader to a completely incorrect conclusion. Imagine a learner reads a text from a negative perspective about their classmate’s culture in the newspaper or that they know their neighbours have read some about their culture (imagine them everywhere). Do we need to help them build the linguistic and literacy skills to navigate either situation? Yes.

I believe it is our responsibility as often one of the first if not the first points of contact for our learners in English to help build their critical reading skills because not doing so can perpetuate a negative perception of themselves, their roles in English, and their identities as learners in their new countries of study, living, or work. Reading is, after all, a key component of language–integral to any learner whether it is in the form of course texts, newspaper articles, or social media shares.

If you’d like to watch a 12-minute highlight video of the talk, please click on this video.

If you’re interested in this topic, James Taylor has also published a lesson plan.

[…] read more about it and even see the full lecture from the PD event you can go to Tyson’s blog Critical readers in the misinformation age . […]

[…] guide started as a chapter in his 2012 book, “Net Smart: How to Thrive Online.” Critical readers in the (mis)information age | 4C in ELT TYSON SEBURN. Did you know that Chicago was the most dangerous city in the US in 2014? I didn’t. I would have […]

[…] of ‘liking’ without clicking through or merely skimming the info. I try very hard to critically evaluate before I share, but I know not everyone does. Some ‘like’ as a sort of bookmarking […]

This website uses cookies to improve your experience while you navigate through the website. Out of these, the cookies that are categorized as necessary are stored on your browser as they are essential for the working of basic functionalities of the website. We also use third-party cookies that help us analyze and understand how you use this website. These cookies will be stored in your browser only with your consent. You also have the option to opt-out of these cookies. But opting out of some of these cookies may affect your browsing experience.
Necessary Always Enabled
Necessary cookies are absolutely essential for the website to function properly. This category only includes cookies that ensures basic functionalities and security features of the website. These cookies do not store any personal information.
Non-necessary
Any cookies that may not be particularly necessary for the website to function and is used specifically to collect user personal data via analytics, ads, other embedded contents are termed as non-necessary cookies. It is mandatory to procure user consent prior to running these cookies on your website.
SAVE & ACCEPT
wpDiscuz
3
0
Would love your thoughts, please comment.x
()
x
| Reply
Loading Comments...
%d bloggers like this: