A very valuable member of my PLN, Brad Patterson, initiated a call for images that were similar, yet different; look alike but have very contrastive features; or require critical thinking to notice subtle, yet important differences.  Essentially, these photos combined together create material that can be utilised when learning language to compare and contrast.  I wondered though, when do we compare and contrast things at any length in reality? Looking at very similar items and differentiating them occurs many times in real life: purchasing situations, for example.  When I’m in the market for a new phone, I’m often at a loss as to which phone, phone plan and phone company to choose from. They’re often masked to look different from each other, but only upon close inspection–side by side–do real differences (term, hidden fees, etc) begin to appear.

A non-commercial usage appears in more retrospective situations.  I’ve just begun my second year teaching in the IFP program.  Having collaborated on curriculum and subsequent material for an entire academic year once already, this year my colleagues and I use reflections from last year to determine the direction for the current cohort of students. Initially it seemed like we’d teach the same program with the same material, perhaps with timing adjusted, but three weeks in, we look back and compare this cohort with last year’s in terms of their proficiency, their needs and what needs to be studied in different depth. Adjustments ensue.

What comparative language do we use?
There’s the lower level comparative adjectives, similes, as…as, and others we’re very familiar with.  Then there’s the more complex intricacies of language we use sometimes in speaking, but more often in academic writing, which require a bit more investigation into meaning, usage and form.  Try looking up comparison, contrast, differ, similar or difference sometime in the Oxford Collocations Dictionary for Students of English.  Lots to work with, isn’t there?  Maybe one of these handouts could be useful.

After that digression, back to Brad’s initial request: images.  I took this shot while on the subway last week.  It wasn’t because of the available comparison.  In fact, I wanted to remember the website on the poster.   Look closely.  There are many similarities in differences between the two girls.  (Look in the comments here if you want some hints and click on the photo for a bigger version).  Luck of the draw, folks. 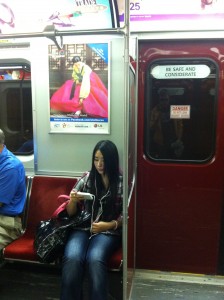 Notice anything similar, yet different?

the collocations dico for students is great , thanks :-))…..@

I have this feeling that I should be seeing something more than what I see. Is it the dark hair of the girl under the photo that matches. The same pink color purse and dress ?

Hmm. Compare the girl in the photo with the girl sitting in front of her beyond just the colours (though you’re right about them). I’ll give you some hints:

a. They’re both Korean.
b. Period which they represent
c. Body position (particularly head and arms)
d. Location of these girls

I want you to work for your correct comparatives. 😉

I think I’m outta my league here. I don’t know too much about Korean culture. Fun that we can see you snapping the shot on the left. Do I at least get a B ?

That’s hilarious! I never noticed myself in that reflection. But nope, no B. Maybe D+. The fact that they are both Korean is just the first similarity. My b, c, & d of these girls doesn’t require knowledge of their culture. Let’s see if any others give it a try.

🙁 I’ve never gotten a D in my life… is there any extra credit available… ok ok… i’ll let the others play too ! 😉

Nope, none there. You can only redo your assignment, young man.

Compare and contrast (a blog challenge) | close up

Comparing and contrasting http://t.co/030Cxvw5 > I want you to work hard for your comparatives from the photo! 😉

Not sure if I’m on the right path, but this is what I see: both female, crouched body position/bending, one arm lower than the other, both looking downward, attention on something below them.
It almost looks like the picture is looking over the girl’s shoulder at the iPod and the text “Experience a whole new world” takes on an interesting parallel with the seated girl’s iPod (technology)! How’d I do?

I love where you’re going with this Carolyn! Much of those are what I see too, and the creative comparisons can go in a few different directions. Personally, I see the traditional vs modern aspect pretty clearly too.

Cool activity and lesson resource – don’t miss it! Thanks @seburnt

Uuuuh this was hard!

Wow! This challenge has really taken off! #eltchat

[…] a lot of differences. This project helps develop your ability to notice fine details. I could use this example in my future classroom by talking about colors and what causes them to be different. Below is my […]

This website uses cookies to improve your experience while you navigate through the website. Out of these, the cookies that are categorized as necessary are stored on your browser as they are essential for the working of basic functionalities of the website. We also use third-party cookies that help us analyze and understand how you use this website. These cookies will be stored in your browser only with your consent. You also have the option to opt-out of these cookies. But opting out of some of these cookies may affect your browsing experience.
Necessary Always Enabled
Necessary cookies are absolutely essential for the website to function properly. This category only includes cookies that ensures basic functionalities and security features of the website. These cookies do not store any personal information.
Non-necessary
Any cookies that may not be particularly necessary for the website to function and is used specifically to collect user personal data via analytics, ads, other embedded contents are termed as non-necessary cookies. It is mandatory to procure user consent prior to running these cookies on your website.
SAVE & ACCEPT
wpDiscuz
17
0
Would love your thoughts, please comment.x
()
x
| Reply
Loading Comments...
%d bloggers like this: