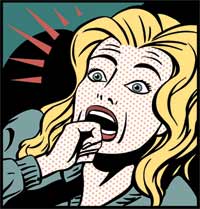 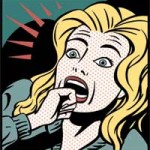 Teacher: Good morning (sombrely).
Students: Good morning (not in unison or even all students).
Teacher: I have some announcements to begin class with. Your other teachers and I have decided to set an example for the rest of the students this year and those coming after you next year. We need a new legend to be passed around for years to come. Due to the overwhelming plagiarism I found yet again on your term papers, we have decided that this entire section will fail the year. Sure, not everyone’s grades have dropped below the pass line because of it and I know you may not think it’s fair, but in the long run, it’ll benefit more students than anything else will. Sorry, but try to think not of yourselves and your plans to attend University of Toronto next year, but rather the greater good. Remember that term? We studied it earlier in the year.
Students: (gasps)

Teacher: Good morning (cheerfully).
Students: Good morning (not in unison or even all students).
Teacher: I have some announcements to begin class with. After long consideration over the weekend, we have decided that the majority of you will be exempt from the final exam because of outstanding improvement over this term! Sure, our policy states that you need to have over 85% for the year before the final exam to be exempt, but I think you all deserve a break given the amount of stress you’ve been under lately. Well done!
Students: (startled, glimmers of hope increasing)

Final word from teacher in both scenarios: April fools!

Which is worse, I wonder: Being led to believe that you have failed the year, in many cases unjustly, only to realise it’s just a joke and everything will be ok (except for those students who legitimately will fail) OR being led to believe that you’ve suddenly had quite the stroke of luck by not having to study for or write the final exam, only for this hope to be dashed by realising it’s just a joke.

I didn’t do either of these things, but I have to admit, if I’d had a class today, I’d have been tempted. It’s one of my favourite special days. For a lot of this type of trickery, of the reading kind, check out the Onion on a daily basis. Another wonderful April fools trick:

Have you done any April fools tricks on your students? Did any of them figure it out before you let them in on the joke? Is this custom justification for exposing our students to such torture? Part of me thinks yes. Perhaps it would break the tension of the last few weeks of the academic year. One could argue that it’s a listening test. 😉

We were abound with April Fool’s jokes yesterday. I faked an email from the head of foreign languages in the institution I work in stating that I would be transferred to another school next year ( that was for my Head of Department and was later recycled to great effect at home). In class, I did a classic double joke, first changing students Class Dojo avatars (which they spotted as a joke straightaway) but then accidentally deleting the class when I tried to restore them – they fell for the joke within a joke big time. 🙂

Makes a change from the usual “extra test today” line. 🙂

As you say, a good joke is good listening practice and good for critical thinking skills as well.

PS – I also liked the ‘Google Nose’ one. I am actually thinking of using it with my 9th graders tomorrow 🙂

I haven’t done any April Fools tricks on students but did enjoy this http://www.guardian.co.uk/technology/video/2013/apr/01/guardian-goggles-video 🙂

Oh, Tyson, I’m a special ed teacher. Playing tricks of that kind could cause serious upsets. Those particular temptations don’t work for me. Ones that are more general, less personal would work better with my students. The example that comes to mind is one I heard on April Fools day on the radio the day after Israel won the Eurovision song contest – the winning song would now replace the national anthem. that caused a lot of people to react!
Naomi (@naomishema)

I can appreciate that one really has to know their own students in order to judge what type of trick would be most suitably received.