The Reform Symposium, an annual free e-conference just wrapped up this weekend and as usual, it offered an incredible mishmash of education-related sessions running the gamut of K-12 and higher ed contexts in both content and language learning situations.

I’ve talked about its virtues as a conference before, but made a few observations about how it struck me differently this year.

It’s a testament to the dedication of the connected community

I’d no sooner heard that RSCON4 was in the works than it was planned and executed. Within weeks of announcing it would take place from October 11-13:

As someone who recently decided there wasn’t enough time for me to plan an e-conference (of much smaller scale) with belta for this November, I am in awe RSCON4 pulled it off. This would only be possible by hundreds of organisers, moderators, administrators, speakers and participants volunteering their time to join each other for a common passion: education. We’re an amazing group that gets things done quickly and works together. It’s this amazing, connected group, however, that could be refered to as “the choir”. 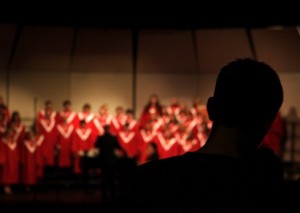 I sat in on a number of sessions, but not as many as I’d like to have. Some were focussed on classroom activities, others on more meta. In some more geared towards the conference sentiment, the leaders discussed the current state of education as a gloomy time where test scores are the powers-that-be’s focus, where administrative and governmental support for teachers lacks. They talked about how we as teachers need to lead the change towards student-centred approaches, towards supporting each other in our endeavours to reform the system for the benefit of our students. Inspiring messages, really. But I had that recurring thought that eats at me every time I’m at one of these connected conferences:

Maybe I’m projecting my viewpoint onto participants who aren’t like me, those participants veiled by the usual suspects at conferences I go to. Maybe they are giving this type of conference a chance for the first time on the suggestion of a colleague, and as a result were inspired to change their practice themselves. I hope so. Either way, the discussion of how to communicate the virtues of reform, both institutionally and pedagogically, to those who can implement the most change, is a valuable one to continue. 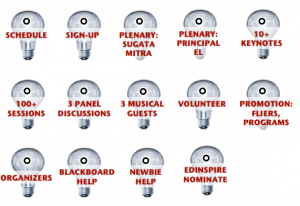 Normally at an e-conference, you submit your proposal in a traditional way, through online form or email.  You wait for acceptance and information about the time slot you’ve been given; you show up when they tell you to. You have your usual technological hiccups just before your session starts and you tell your colleagues who missed out that eventually they’ll be able to watch recordings of your session, but they never do because they forget by the time it’s available. NONE of this was the case for RSCON4; it was crowd-sourcing at its finest.

These amazing feats of resources led to only one small criticism:

First, I noticed a couple of session scheduling issues. One, the ration of sessions to participants this year was off at times. At many times, there were 5 great sessions scheduled at the same time. Though I missed a bunch of times, several of the sessions I did attend had fewer than 10 participants, a couple times only 3 or 4 on top of the presenter and moderators. Sure, there are advantages to a small groups, but if it had been my session, I would have had the crushing feeling like I was presenting primarily for the benefit of the recording. Of course, I’m no stranger to organising conferences and know it’s guess work as to how many sessions to schedule based on how many attendees there might be, and perhaps there is a limit to the number of people that Blackboard Collaborate rooms can accommodate, but keynotes had a much higher number, so the limit couldn’t have been too bad. Additionally, because we all (I think) scheduled our sessions ourselves, there was little way to realise that you’d overlap with a particular session you wanted to participate in. This happened with me and Adam Simpson. I wish we had chatted about this beforehand. Lesson learnt.

EDIT: Tara Benwell pointed out to me that you can experience the real recording I mention below by clicking on the BBC version of the recording. So, take the next bit with a grain of salt as the number of recording formats is actually better than ever: Second, the recordings this time around, which may simply be a limitation of the platform, are Youtube-style. Normally in these types of recordings, you experience the session as though you are actually in the session. You see the entire platform with chatbox, slides, and presenter webcam, just like anyone else there. You even see the notifications when someone has entered the room late.You experience the nearly unbearable urge to type along in the chatbox, but you quickly realise you’re simply a fly-on-the-wall of the dynamics of the session and feel that much more motivated to attend the next one live–a frustratingly wonderful type of recording. This time, I notice the recordings are simply a video of the slides and the presenter’s voice, no chat box, no dynamics–a bit like watching an interesting, but online lecture from the past, or attending a GoToWebinar from 2009 (has GoTo improved since then?).  I get bored watching this type of post-conference video, but maybe others don’t mind. Others don’t know what they’re missing.

In the end, despite any minor shortcomings, RSCON4 continues to be the model for e-conferences, this year in more ways than one. My observations are one of a repeat participant in online conferences and one who is eventually organising an online conference as well. If it was your first time attending I’m sure none of these things were the remotest of issues for you and that’s the way it should be.

RSCON was AMAZING! It was an awesome e-learning experience for so many. The schedule board was filled with outstanding educational leaders presenting on some very relevant topics.

It was breathtaking watching the planning unfold. Educators volunteered COUNTLESS hours to make sure that the presenters and the more than 400,000 invitees had a perfect conference.

I’m very proud to have been apart of it.
Looking forward to next year!

Very sweet of you, Eugenia. 🙂 Thank you.

I find myself in total agreement with everything you say here, Tyson.

Having been involved in the organizing and running of an online conference (one on about the same scale as this), I am willing to forgive any slight slip up that occurred. I hope no one reading this excellent post underestimates just how difficult it is to coordinate one of these things. I salute all those involved and can’t wait until next year’s event.

I don’t think they would. I even concede this fact by suggesting that I too know what it’s like to organise an event like this.

Hi, Tyson! Too bad I missed this. It looks like a very powerful e-conference. I hope to join one next year. I salute the organizers for coming up with a conference where everyone is collaborating and working as one towards professional development.