NB: Let me preface this post by saying if you have never touched a Google doc before, you may want to watch a quick Youtube tutorial on the subject first, like this. You won’t regret it.

My first workshop of the year is coming up at the #realize15 forum on January 23-24. In this session, I’ll be talking about a blended EAP research project I did with students this past fall. In this second iteration of the assignment this year, I added more of a digital component through Google Drive, which I more heavily use with each new term. The basic functions have remained constant, but like with many everyday situations, the infamous ‘teacher eye’ continues to find stronger and more collaborative ways to incorporate Google Drive functions into the classroom. This leads me to the next few posts on its functions for course purposes, partially in support of my #realize15 session, partly just because I like to persuade people to use it. Today’s topic: Google Docs for in-class collaboration.

Very often in writing courses, some form of collaborative writing occurs. Probably one of these scenarios sounds familiar:

I’m sure there are more. In each case, however, obvious limitations occur: the number of students who can give feedback to a piece of writing; the number of students who can be at the board at the same time; the temporary nature of board work; your ability to monitor student writing closely enough while walking through the classrooom; etc. etc. This led me to wishing there were another way to do these types of shared writing tasks.

Oddly, I have been using Google Docs as a shared document tool with my colleagues to plan our weekly syllabus and take notes at course meetings for several years. I’ve even shared information with workshop attendees using it. Though I’d never really cowritten anything substantial with a colleague,  a colleague of mine who teaches our first-year History credit course, Alexandra Guerson, often writes papers with a partner in different time zones. With this mounting familiarity in Google Docs, the leap to use with students for in-class collaborative writing was natural (and somewhat of a -why did’t I do this before- facepalm moment).

One day before class, I asked students to bring their laptops to class (NB: this room had accessible wifi and a projector–pretty essential for maximised functionality). We were reading a short text with academic reading circles and learning how to respond to questions with short answers (SAQ)–those exam-type comprehension questions that require several cohesive sentences and evidence from a text, like mini-essay body paragraphs. 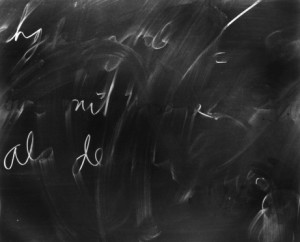 We began traditionally, by answering an SAQ individually with pen and paper. Upon completion, they exchanged with a partner who cluttered up their paper with little bits of pen/pencil scratches and questions in tiny print, aimed to be squeezed into the small blank spaces available. Once returned, each student took feedback and rewrote their answers on a new paper, sometimes whispering a question to their partners to clarify meaning or simply decipher written feedback. I asked three to put their answers on the board (this is the definite max who can write on the board simultaneously) while others were finishing. Even though these students had already finished a second draft of their answer based on peer feedback, they still took their time, laboriously staring at the board, then erasing parts of their answer, then rewriting. All in all, this process probably took 10 minutes longer than I intended. Most other students finished. They waited, checking their phones. We then worked on the board answers together; I elicited errors from the crowd; I corrected in different coloured chalk all with the resounding permanence of being erased one fell swoop of my board eraser. Gone into oblivion (and perhaps a few photos taken by students who prefer not to write things down as we go).

Round 2: students use Google docs

For the second round of practice answers, I shared the link (bit.ly/020_conlin) to a Google Doc where I allowed anyone to edit anonymously if desired. On it was only the photo and I began typing the question and instructions in front of their eyes:

Next, I asked students to type their answers as they were writing them into the space provided below it. To their amusement, they began seeing a few answers appearing on the screens before them, followed by heads turning around the room to see whom it was typing. After a few minutes of big eyes and little giggles, they were composing their answers above or below another. It was magical to watch 15 answers simultaneously appearing. I took this opportunity to add further instructions and my own answer to the document.

Once all students were completed, I projected the Google Doc on the screen and showed them the next instructions. It was time to give feedback to each other based on shading categories we previously used (…when despite my best sales pitch, not everyone had highlighters):

First, I demonstrated on one answer. Then, I assigned each a classmate’s answer (NB: for this, they had to tell me if I’d given them their own since no one’s was clearly identified). Their goal was to read and highlight a classmate’s issues in these colours on the Google Doc. Colours began appearing all over the document like rigid horizontal brushstrokes! More whispering and giggling.  Here, they started to see how their answer was being mysteriously highlighted as they watched. Remember, because it was in anonymous mode, only students who had logged into their Google account on their own were identifiable at this point–a surprisingly effective way to overcome the initial fear of publicly sharing one’s writing. One answer looked like this, for example: 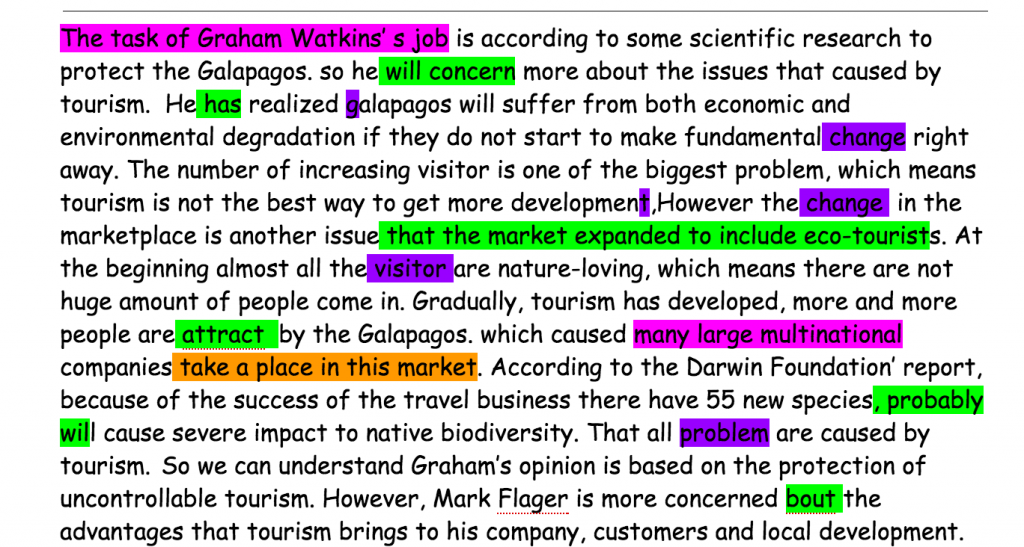 The final step of this peer feedback was commentary and more specific editing. For this, I changed the Google Doc into “Suggesting” mode (very similar functionality to Microsoft Word’s Track Changes). I demonstrated on one answer that when reading an answer it’s valuable to give specific feedback through comments, asking for clarification or giving suggestions. I made a few edits to a paragraph–missing punctuation, incorrectly spelled word, etc–to show how the edits would appear in the document until resolved by the user. This time, I put students into partners to coedit an answer together. The result was fascinating. Students were drawn into this activity, giving loads of feedback (NB: sometimes justly, other times they were wrong too–a skill that improved slowly over time). Paragraphs became colour artwork like this:

Once every last comment had been given, everyone looked with focussed attention at the feedback their answers had been given, accompanied by laughter and the occasional light-hearted accusation of injustice. We went back up the page to look at my sample answer, analysed it for strengths, and ended with new homework instructions to compare their answers to mine, consider the feedback they’d been given and resolve it (select to accept the changes or not) and revise to a second draft answer in a new Google doc they’d create and share with me.

Using Google Docs for effective feedback is not an exact science, but the point was for students to become familiar with its functionality, appreciate what it can do more efficiently than with pen/paper/blackboard, and keep a permanent record of what we’d done in class together.

In a forthcoming post, I’ll talk about using Google Docs revision history and comments to demonstrate writing process and give feedback directly to students in real-time.

Tyson,
Thanks so much for this. I’ve been trying to figure out how to do a collaborative reading comp activity in French class, where we can mark up what we understand and don’t, and pull out main ideas….this could really work. Yay!

Glad to hear you’ll try it out. Students (and me, really!) think it’s cool to see themselves typing on a projected screen.

I have been using Google Docs recently in a similar way with 8th/9th grade students writing short stories. The first time I used it to show them how I could monitor their writing and provide instant feedback through Google Docs. The second time we did some collaborative editing and commenting. The only issue that arose with younger students was that the accusations of injustice were not always light-hearted and allowing anonymous users can lead to sabotage!

Those minor difficulties aside, their post-session feedback was that they got a lot more out of the experience and felt they produced better work than when writing by hand.

Yeah, I can see how some commentary monitoring might be needed for that age group.

[…] can be used in class, but I’ll point to a couple of excellent blog posts from Tyson Seburn here and here to give you some ideas about its uses in academic writing. I’ve used it for […]

[…] Docs – Tyson Seyburn wrote an article about Google Docs back in January. He wrote about student’s using Google Docs to collaborate and annotate […]