That’s not my name; instead call me Sally.

In the brilliant guest post, Tara Benwell inspired everyone (at least a bunch of us) to continue with my thoughts on making Twitter’s Follow Friday #FF more meaningful.  In this case, it’s all about spending some time reading through your favourite ELT blogs and dusting off some valuable treasure.  You can read more about the specifics of the challenge in this post.

A plethora of PD in blog posts awaited me last night
I spent a few hours last night reading through archived posts from my favourite blogs (and some I’d forgotten about, hidden away in my cluttered bookmarks), many of which from before I’d really gotten to know these educators.  What a treat and great way to spend an evening!  With several now bookmarked, EnglishGateway’s Teacher Blog: Pronouncing Foreign Names – No Need to Mangle, which is about learner/instructor-chosen English names, resonated with me because of my experience with Asian names.  I suggest you click over and read it first before proceeding.  Schema activation required!  Thinking caps on!

My first experience with immersion names, Muriel
My older sister went to a French immersion elementary school (quite common here, at least in the late 70s/early 80s) for the first few years of her education.  Though her name is Julie, she was given the name Muriel for the class.  The thought behind this obviously was to immerse the children in all aspects of French, not only language classes, but also identity.  As I was 6 years younger, I was fascinated by the convention and couldn’t wait to see what my French name would be (~I’d hoped for Etienne or something very un-English sounding).  Sadly, my parents didn’t enrol me there because they felt that learning two languages simultaneously at such a young age had hurt Julie’s English language skills (particularly spelling and grammar).  Of course that’s debatable in another conversation.

My feelings about English names morphed in Seoul
The next time I encountered this renaming idea was in Seoul in 1998 when I first went there to teach English.  Many of the young women and men had either been given or chosen English names that in many cases, sounded similar to their Korean names (e.g. Gene, Sue, etc) or biblical references (e.g. Ruth, Esther, etc–men, not so much).  Those that had the opportunity to either choose their own English names later in life, often stuck to one pattern (e.g. Jimmy, Johnny, Sally, Katie, etc) or a completely random what-were-you-thinking sort (e.g. Milk, Cherry, or my favourite, Somewhat!).  At first, I just related this convention to my previous experience with French immersion names, but it soon was made known to me that my students usually felt that their Korean names were too difficult for foreigners to pronounce.  Ok, a fair enough assumption, I thought.  Not long after that though, I started to learn Korean and believed I was being played for a moron.  Their names weren’t that hard at all.  They contained most of the same sounds we had in English and even actual words familiar to me in other contexts.  How is Mi Young or Su Mi or Hae Yun or Tae Gu hard to pronounce?!? I started to feel insulted every time one of my students suggested their name were too complex for me.  My strategy for proving my linguistic intelligence became simply asking students to say their names once with me repeating–to which Ooohs and Aaahs and clapping followed, indicating how masterful my Korean pronunciation had become.  I began demonstrating that I was capable and eventually ignored their English names altogether unless insistent.  Still, the more new students would utter this ridiculousness about their Korean names, the more insulted I became.  I contemplated, over and over–Why is it they all think this?  Had their primary English teachers (who would have been Korean themselves) pounded that notion into their brains?  Had “My name is too difficult for foreigners to pronounce” been a sentence they’d memorised early in their lives?  My research commenced.

Your students’ original names are 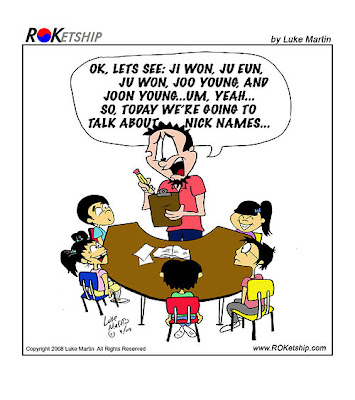 Kim Dong Hyeok, Choi Beom Suk, Park Hye Mun.  These are your students’ names on a list.  Say them out loud.  Did you say /kɪm doʊŋ hyʌk./, /tʃeɪ bʌm suk./ and /pɑːk heɪ mun/?  If you pronounced them they were they were spelled, you’re wrong.  Therefore, they are too difficult and complex for you to say.  You need English names instead…  The problem all along was the romanisation of the Korean alphabet.  In attempts to (over)simplify it into the Roman alphabet with English-speaking pronunciation, spelling rules lost meaning.  Where is ‘eo’ /ʌ/ in English?  Oh right, luncheon.  Where is ‘u’ /u/ in English?  Oh yes, tune.  So if in this little experiment, you actually said Kim D-oh-ng Hyuk, Chay Bum Sook and Pock Hay Moon, (or something reasonably similar) you’re likely much closer to an expert in Korean pronunciation than you think.

With this researched conclusion in mind, I decided that English names used for this pronunciation purposes or to immerse into English-speaking society was rubbish and I would never again help learners choose an English name.  I didn’t want to contribute to either a misinformed opinion of our abilities to copy pronunciation or homogenise one culture onto my students by erasing/replacing their original names.

Fast forward to 2010 and I’m surrounded by Chinese learners
Years later, I now teach classes dominant with Chinese names.  90% of them also have English names before I meet them.  The hair on the back of my neck still goes up whenever I say their English names, but admittedly, their Chinese names look intimidating with all the Xs, Qs and Tzs.  It begs the question–is this just a matter of romanisation again?  Are their names equally “difficult”?  I’m thinking yes.  Perhaps checking out the links provided on EnglishGateway’s post could help in that regard.

Names and critical thinking applications for class
How does this translate into lesson?  You might wonder.  Often when the IPA comes up in a pronunciation focus, I suggest students try writing their names using the IPA that they think matches the original pronunciation best and I give it a go.  If I’m way off, I suggest rethinking their choice.   If I’m close, I congratulate them and pass them on to the next task:  connect the pronunciation of your name to words you know in English.  How can you spell your name using those conventions?  Your goal is to make it as simple as possible for someone with no experience of your language to say it correctly.  Critical thinking skills – check!

On a final note, my lil foible
Amidst my passion about this topic and this post, I realised that I can’t find EnglishGateway or any of its staff on Twitter.  Shame.  So I guess you’ll just have to be introduced to their blog for now.  Happy name-calling!

23 thoughts on “That’s not my name; instead call me Sally.”