Connecting to students through important events Comparing and contrasting 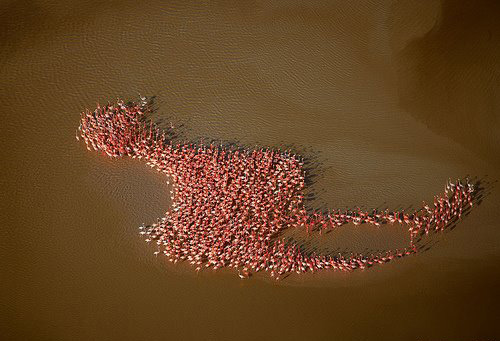 These flamingos apparently arranged themselves into this particular shape, which may only have been noticed from an aerial shot like this one. When it comes to arranging themselves into the best groupings, my students are not flamingos.

After my first week back into the academic year with 1st year university students, “simple” classroom management issues have proven once again to be important factors to consider.  How often do you just put students who sit next to each into pairs to work on their activities? It’s tempting apple to bite, but I try to resist. We may often think student groups before, during and after activities seem an obvious call, but being cognisant of their purpose in terms of level coordination, group dynamic variety and *cough* personality quirks *cough* will increase the productivity during activities and buy-in (from teachers, but also from the students themselves). What’s sometimes easy to forget is that we can control the groupings.  It’s not all up to where the students have sat.

First though, when I talk of “student groups”, I’m referring to individuals, pairs, groups of 3, larger groups or whole class.  Within these numbers, then it’s also a matter of student level variance and cultural mixture. It’s also a good idea to consider how to put your students into the groups you’ve decided on.  Instead of merely pointing at students and indicating who their partner is, making a purposeful activity out of it can break up the monotony this awkward movement from chair to chair. The most obvious arrangement isn’t always the best.

Arranging groups through activity
I like to give students a task that results in the groupings.  For example, if we were learning about collocations, say noun + noun, I may have a bunch of nouns that collocate with others on small pieces of paper that I distribute randomly or with particular pairs in mind.  I’d instruct students then to match themselves up to make noun + noun collocations.  Once done, we check them and pairs are formed.  The point is to use the process of arrangement as another practice opportunity.

It’s learning at every opportunity.

Level coordination
Obviously we have more or less proficient students in class.  I often pair two stronger students with one weaker.  This gives the weaker one the opportunity to observe without feeling the pressure of holding up their half of the conversation and also prevents the stronger from feeling dragged down by limitations.  Alternatively, if you pair two weaker with one stronger occasionally, use the stronger as mediator, even translator (yes, L1 is fine with me sometimes), but an additional task, like having the student repeat the translation or take a risk by modifying words, should accompany to make the most out of the L1 availability. Either way, the stronger is recasting what the weaker students want to say to each other, showing them how and supporting them.

Everyone gets the most of their grouping instead of struggling aimlessly or breezing through pointlessly. Pairwork is not the only option.

Group dynamic variety
Do your students figure out where their seats are on the first day of class, then never voluntarily move from that seat after that?  Mine do.  Sure it’s comfortable working with the same partner everyday–you get to know them and trust them, but how boring.  Do you regularly talk to just one person in your native language each day? I doubt it. Varying the number of and actual people in a group brings a much needed authentic variety of accents, proficiencies, personalities and opinions to the conversation.  On top of that, I always attempt to give students individual time for writing or reading.  If we’re thinking authenticity, who is never alone during the day?

Personality quirks
Like weaker students, I often start shy students off in groups of 3, allowing them the option to listen passively, while hopefully building confidence in their abilities to keep up with the conversation.  However, they may continue to be shy if not pushed to try.  Therefore, it can be useful to good to keep shy students in pairs, placing the onus on them to hold up their end of the conversation. It’s always a good idea to determine before long if the root of their shyness is really a language or personality issue.

Another quirky student is the one that seems just a bit off in some way.  They’re keen, but not quite like everybody else.  Other students tend not to want to be paired with them.  Sound familiar? Another reason groups of 3 make sense, even groups of 4.  Putting them in a pair might cause their partner to clam up.

: Well, it depends on whose point-of-view you’re looking from.  At minimum, it shows teachers have noticed these quirks and tried to accommodate them.

Groupings may seem so simple and obvious, but I’m sure there are a bunch of us who stick to the easiest: pairing up students who are already sitting together. With a little more consideration of level, personality and variety, we can affect more productivity and trust from the students.  There are so many other factors with regards to groupings that I could talk about, but not enough space in one blog post.  Instead, maybe some of them will come to you and we can chat a bit in the comments!

28 Responses to My students are not flamingos